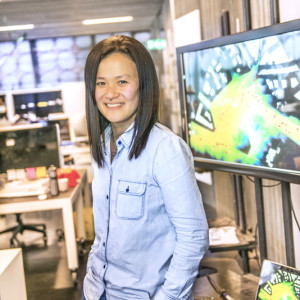 Flora Salim is an Associate Professor at RMIT University, Melbourne, Australia. She leads the Context Recognition and Urban Intelligence (CRUISE) group. Her research interests include context and behaviour modelling, time-series and spatio-temporal data mining, and pattern recognition and machine learning for smart cities, smart buildings, and smart mobility, using IoT, sensor, and multimodal data. She is a Deputy Director of the RMIT Centre for Information Discovery and Data Analytics. She is a Humboldt Fellow (experienced researcher), awarded by Alexander von Humboldt Foundation, Germany, and a Humboldt-Bayer Fellow, awarded by Bayer Foundation, Germany. She is also a Victoria Fellow 2018, a highly-competitive merit-based award from the Victorian Government.

She is an Editorial Board member (Area Editor) of Pervasive and Mobile Computing. She is an Associate Editor of the PACM on Interactive, Mobile, Wearable and Ubiquitous Technologies (IMWUT), the journal publication of Ubicomp.

Dr. Salim has been awarded two ARC linkage grants, a Discovery grant, and coordinated national and international industry projects, with the total amount awarded of over than $3M in the last 5 years, in collaboration with Microsoft, IBM, Northrop Grumman Corporations, Arup, City of Melbourne (CoM), Mornington Peninsula Shire (MPS), Siemens, Aurecon, and several other companies.

She is the recipient of the RMIT Media Star Award 2019 (industry). In 2018 she received the RMIT Award for Research Impact - Technology 2018. She received the RMIT Vice-Chancellor's Award for Research Excellence – Early Career Researcher in 2016. Previously, she was an Australian Research Council (ARC) Postdoctoral Industry (APDI) Fellow in 2012-2015. Prior to that, she was a postdoc in the Spatial Information Architecture Lab, part of the RMIT School of Architecture and Design, working on modelling and optimisation problems in architecture, engineering, and construction research projects. She obtained her PhD from Monash University in 2009. Prior to her PhD, she was a Senior Software Engineer in mediaproxy, developing realtime signal and content monitoring solutions for TV & broadcasting companies. She has also received the IBM Smarter Planet Industry Skills Innovation Award (2010); and a Google Anita Borg Scholar (2008). She received the DSTC Best Honours Thesis Award (2003) after her BComp (Hons1) completion, for the best thesis among all Honours and Masters (Minor Thesis) students in Australian GO8 universities.

Dr. Salim has been awarded two ARC linkage grants, a Discovery, and numerous national and international industry contracts, with the total amount awarded of over than $3M in the last 5 years, in collaboration with Microsoft, IBM, Northrop Grumman Corporations, Arup, City of Melbourne (CoM), Mornington Peninsula Shire (MPS), Siemens, Aurecon, and others.